PORTLAND, OR -- Network of Ensemble Theaters (NET) is pleased to award the $10,000 NET/TEN Continuation Grant for 2019 to Mondo Bizarro (New Orleans, LA) and Clear Creek Creative (Disputanta, KY) for their collaboration on Ezell: Ballad of a Land Man. Awarded annually as part of Network of Ensemble Theaters’ Travel and Exchange Network (NET/TEN) program, the NET/TEN Continuation Grant is designed to sustain and move forward relationships that were previously funded by NET/TEN Exchange Grants.

In the summer of 2014, Clear Creek Creative and Mondo Bizarro participated in a three-week exchange supported by NET that resulted in the national touring premiere of Mondo Bizarro’s site-responsive performance Cry You One and a presentation of Clear Creek Creative’s roving theatrical performance Land, Water, Food, Story. Featuring dozens of community engagement activities with local farmers, artists, foragers, builders, and activists, the exchange produced three nights of midsummer performative walks in the woods that culminated with a four-course, farm-to-table feast on the Clear Creek grounds. The relationship between Mondo Bizarro and Clear Creek Creative has continued to develop over the past five years through additional residencies and artistic exchanges.

With support from the Continuation Grant in 2019-2020, the two ensembles will produce a new piece together. They are developing Ezell, a theatrical study-story-ceremony, within the context of the current transition from one extractive industry to another -- from coal mining to hydraulic fracturing (fracking) for natural gas -- as a primary source of economic and socio-cultural identity within much of the Appalachian region. The presentation of Ezell will involve four key components designed to maximize community connection with the work: 1) a site-responsive performance; 2) an interactive visual and sound installation; 3) a locally-sourced community meal; and 4) an engagement session with audiences to integrate the experience and explore the themes of domination and resilience. 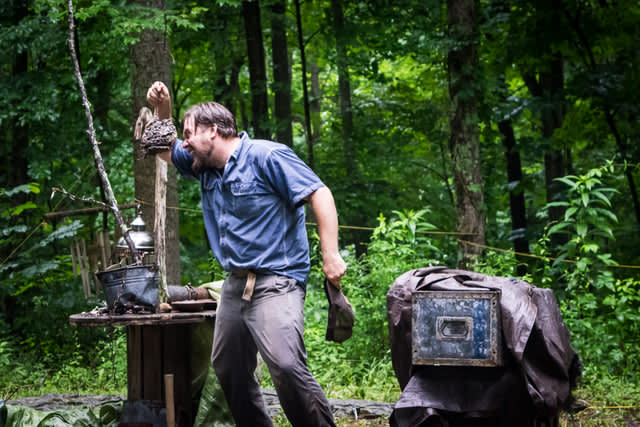 About Mondo Bizarro:
Mondo Bizarro is a New Orleans-based company that creates interdisciplinary art and fosters partnerships in local, national, and international communities. Its creative endeavors range from ensemble performances to large-scale community festivals, from innovative digital storytelling projects to site-responsive productions. Since 2002, their wide array of imaginative projects including FLIGHT (2007-2010), LOUP GAROU (2009-Present), RACE PEACE (2008-Present) and CRY YOU ONE (2013-Present) have toured to art centers, universities, and outdoor locations in 38 states across the country and abroad. Mondo Bizarro currently manages Catapult, a performance laboratory dedicated to the development of original performance, innovative design, and social justice.

About Clear Creek Creative:
Clear Creek Creative creates and produces original outdoor works of art that deeply engage questions of land and community at their off-grid, solar-powered site in the rural Appalachian foothills of Kentucky. They have presented over 200 artists through the multidisciplinary Clear Creek Festival; devised and directed community-engaged performance projects throughout Appalachian Kentucky; and curated and produced numerous large-scale, farm-fresh feasts along with original site-responsive work based in the stories and issues affecting their communities for a decade.

About Network of Ensemble Theaters (NET)
A national community of artists and arts organizations dedicated to collaborative creation, Network of Ensemble Theaters (NET) exists to propel ensemble theater practice to the forefront of culture and society. NET links a diverse array of ensembles and practitioners to one another and the performing arts field, encouraging collaborations and knowledge building/dissemination. NET is committed to the advancement of the ensemble form and strives to bring about change in the world beyond ourselves through the transformative power of collaborative theater and ensemble practice. Programs and activities focused on field building, field convenings, and field professional development/resources serve to connect, nurture, and sustain NET’s 350+ organizational and individual members
throughout the United States.

The NET/TEN grant program is supported by lead funding from The Andrew W. Mellon Foundation.