The day was March 22, 2014, and our wonderful group from Ear Say Youth Voices was invited to go on a trip where we met another theater group. We had a long way to go from Queens to Brooklyn and took three trains. When we arrived and entered their theater, they welcomed us with open arms. It was great to meet all of them. Right away, we started to play games to warm up a little. We warm-up with one of our warm-ups, where we performed our names in action, movement, or sounds, and shared where are we from. In the full group, we also played a game where we passed a ball around without dropping it. As we played and warmed up, the pizza arrived. We were starving, and we all ate together. The theater’s space upstairs is like a restaurant, a lot of tables with chairs. It was fun to get to know the other theater group. As we ate, the people who were going to perform practiced their lines, they gave us an introduction about what an ensemble is to them, and what show they were sharing with us. 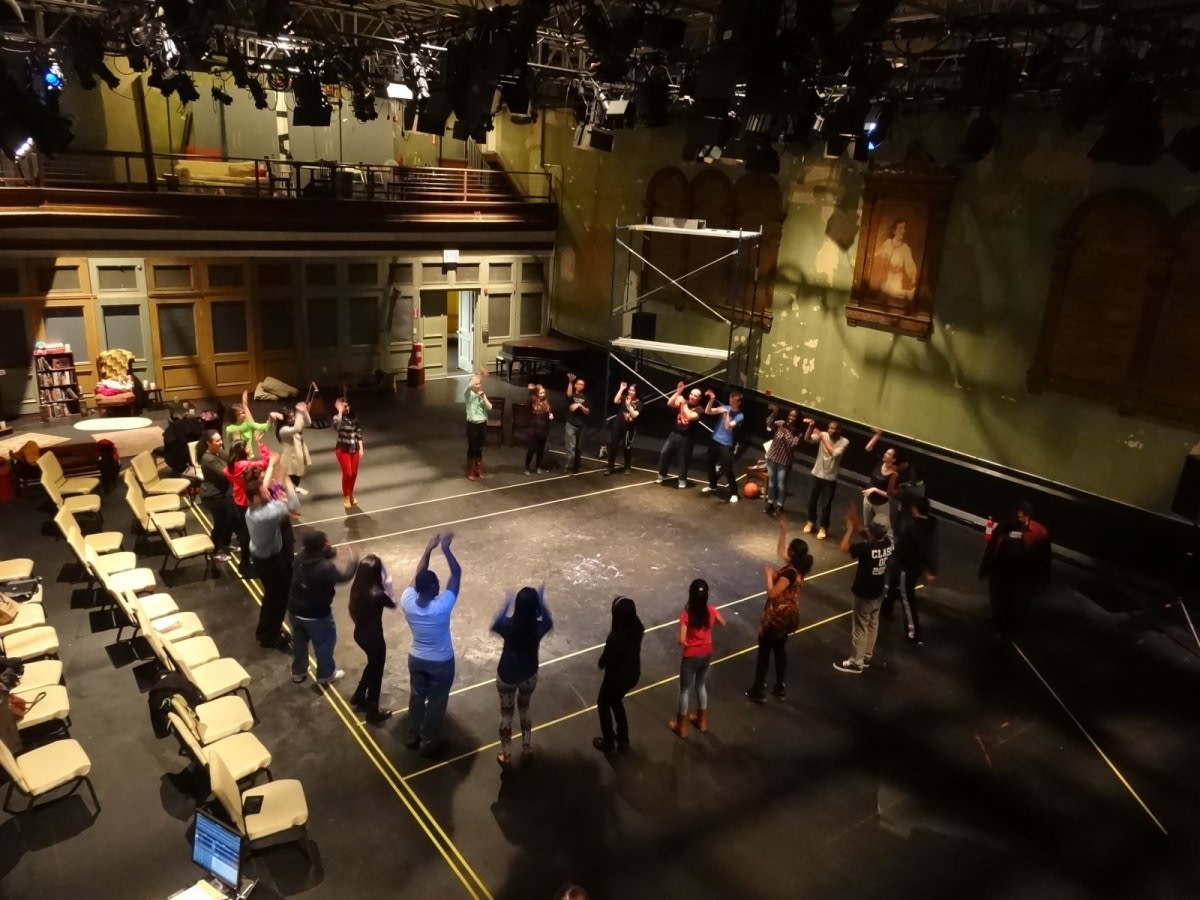 We learned about the Network of Ensemble Theaters. How do we define an ensemble in a theatre? We learned that a group of people or things that make up a complete unit is an ensemble. An ensemble could be a musical group, a group of actors or dancers, or a set of clothes. One friend of mine said, "The great thing about working with an ensemble, you get to share ideas, new experience, learn new things, and it’s great to mix what each ensemble can offer."

To me, an ensemble is when a group of people gets together and expresses their ideas: when they decide what to do as a family. It's not about me, or I. It’s about us and we. We belong to a community. We make a community with our company; we make it about the production, the whole play. We work together to make the play, not the I or the me. Our ensemble is different than Irondale’s theatre’s ensemble because our group kids are from many different countries. We are from all over the world, forced together in Queens! We all think about peace together because most of our countries are very dangerous. With the other theater group, their ensemble members are all from one place, which is the United States. The workshop presentation at Irondale made me think about what it means to build an ensemble by looking and listening, supporting my fellow actors, and working together as a community. 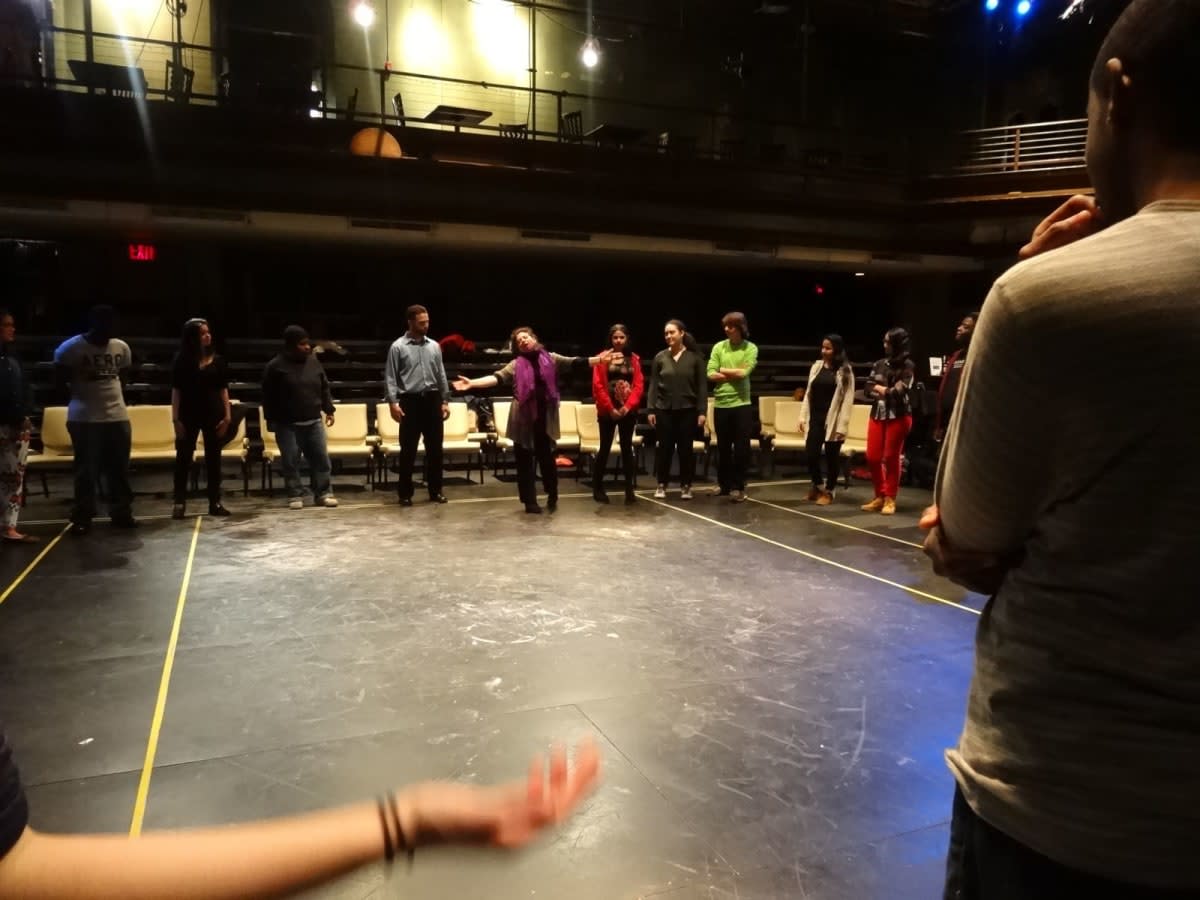 Look and Listen: An ensemble actor always pays attention on stage and off stage with their eyes and ears.

Support: An ensemble actor, since they are looking and listening, is ready to support their fellow actor. If something is missing they're on it. If someone leaves a prop on stage by accident, they pick it up. If someone drops a line, they help.

Community: It’s about working together as a group-each individual work together and creates a community and piece of work.

We stayed to watch their play. The actors were so sharp. They knew every line and action-movement in the play, The Dead End. The kids of the Dead End are young adolescent boys on the verge of growing up. The show was about crime and a love story, and it took place in New York in the 90’s. There were five teenagers who form the dramatic center of Sidney Kingsley’s Dead End. They see all of these skyscrapers growing around their neighborhood in the Lower East Side, and they wonder: “will we ever live there?”. They were swimming in a murky part of the river, instead of a pool. There is a rich man that is a big gangster who’s name is Martin. He came back to visit his old neighborhood but he is running and hiding from the police because he killed people. He killed people and had plastic surgery done on his face so police don’t recognize him. People called him baby face before the plastic surgery. Unfortunately, his friend Gimpty knew that Martin was actually baby face and turned him in to the police. Gimpty is an educated man who went to college for six years. He went to college for architecture, but still can not find a job that pays him to design homes like he wants to, so that is why he is still stuck at home with his mother. In one scene, Gimpty begins talking about evolution and how things change in history, the teen gangs came closer and closer as he went on. They were interested about the things he was saying. As he spoke, they listened to every word of it. That was all because they grew up in the streets and he went to college. These teen gangs were from poverty, they didn’t go to school, they did not get education. All they had was a hope to survive for the next day, and find their meal, to not die of starvation.

What most inspired me from the show was how sharp the actors were. I remember an actress from the play; she changed her character in every scene. She knew what character to be at the right time even when she continued to change her part to another role. I also think that memorizing all these lines is a very hard challenge. It takes a lot of effort and the actors handled it. The performance is different than the games we played with the group; the warm-up games are about entertainment and individuals. The performance needs creativity, cooperation, and teamwork. When you perform, it is an interactive process with the audience and the involvement of everyone on the show. When you perform and receive feedback, you feel self-satisfaction and happiness. The Dead End actors got feedback from the whole audience and I'm very proud of them.

The situation they showed was bleak and hope does not come easy. The play is not depressing. The play demonstrates how the gap between the poor and the rich is increasing. It is the reflection of the economy’s downturn in the twentieth century. 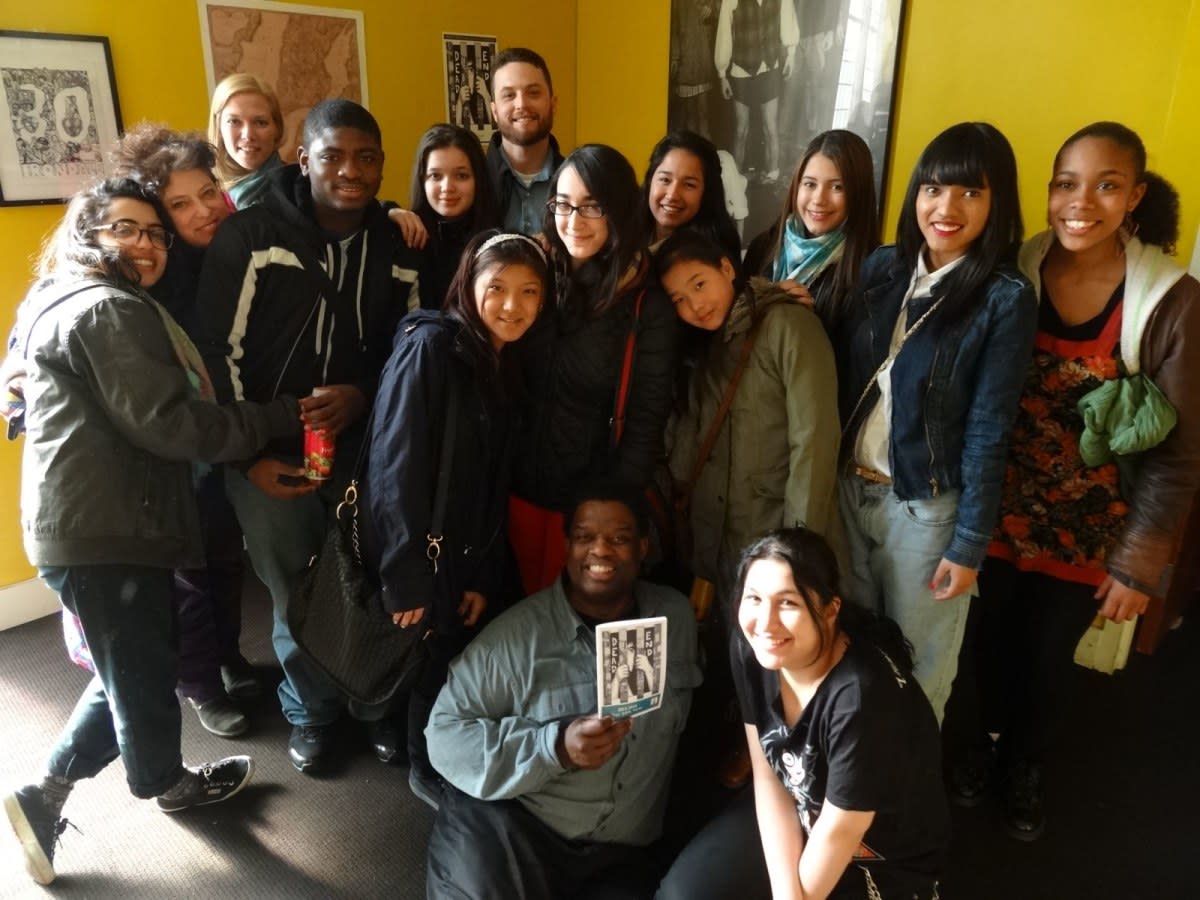 Written by Muhlisa Nazarova a member of EarSay Youth Voices
Muhlisa Nazarova is a freshman in high school currently living in Queens, NY.
She is from Uzbekistan and has been in the United States for a year and a half.
Edited with Meera Al Sayegh
Meera Al Sayegh is an NYU college student in her senior year, currently interning with EarSay and studying with EarSay co-founder Judith Sloan.
Meera is originally from Lebanon.